Belgian Refugees in Devon during WW1

Celebrating our return to normal face to face meetings at Richard Newton Hall on the 1st of September, the Teignmouth’s Men's Probus Club speaker, Ciaran Stoker presented a powerpoint illustrated talk about the plight of the Refugees from Belgium fleeing tyranny in WWI. 24 members were told that over a quarter of a million escaped to England during the 1914-18 conflict. Refugees arriving in London were distributed to many Counties who formed War Refugee Committees financed by public subscription and fund rising events. In Teignmouth and Shaldon some 1331 individuals were supported with £37,366 raised for the cause. The refugees were mostly family groups, many not o fighting age with many and varied occupations. 25% were young and still in education. Language was a problem as many were not able to communicate in English and schooling mostly provided within the refugee community.

The Devon Refugee Committee was led by Earl Hugh Fortesque  with Secretary Clara Andrews who went on to greater service in London and later decorated by Belgium for her services to their refugees. Clara’s logbook for October 1914 to February 1915 survived and records the personal details of some 400 refugees. Teignmouth & Shaldon Committee was let by Hamilton Young and Secretary Miss A Lynne.

The members were told of several interesting individual stories collected from family survivors giving a picture of how hard life was at that time.

The speaker Ciaran Stoker a graduate for Exeter University in history, particularly the mediaeval period mentioned that a detailed examination of the 1921 Census was needed to determine how many Belgians remained after the war but most returned to their homeland in 1919 with some 232 recorded leaving by train from Teignmouth station on one such occasion, leaving 50 behind too ill to travel.

The photograph shows a memorial presented on behalf of the grateful refugees which can be seen today in the gardens of the Den next to the bowls green.

The vote of thanks by Steve Battersby.

The next meeting at Richard Newton Hall is Rd. David Halpin about “The Unnatural Death of Dr Kelly” 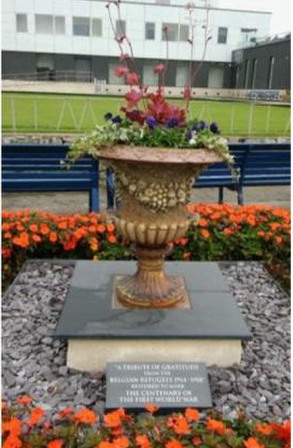