Blessed with a sunny day, Bishopsteignton & Bovey Tracey Probus clubs joined Teignmouth members for a day trip out to Seaton Tramway on 30th March. The idea came from Teignmouth club secretary John Polley a retired London Tube driver who volunteered his services for the tramway to keep his hand in!

55 members and ladies were entertained on the pink No11 tram and a second No.10 service tram in tandem so most could travel on the open top upper deck, arriving at Colyton terminus in time for tea & coffee. Tram drivers Robert Oldfield & Probus Member John Polley presented a 30minute talk and slide show of the tramway’s history including amusing hand signals to passing tram drivers. A ‘thumbs up’ means your trolley is still on the overhead wired after a junction and a ‘two finger’ sign meant there are two trams to pass in the overtake loop. This talk was followed by a splendid buffet lunch during which Teignmouth member Gordon Plahn received his Life Membership badge an honour awarded having attained the age of 90years.

On returning to Seaton Terminus some members visited the Wild Life Photographer of the Year Exhibition or a visit to town. John the driver for A&B Coaches of Totnes thoroughly entertained his charges so a good time was had by all. 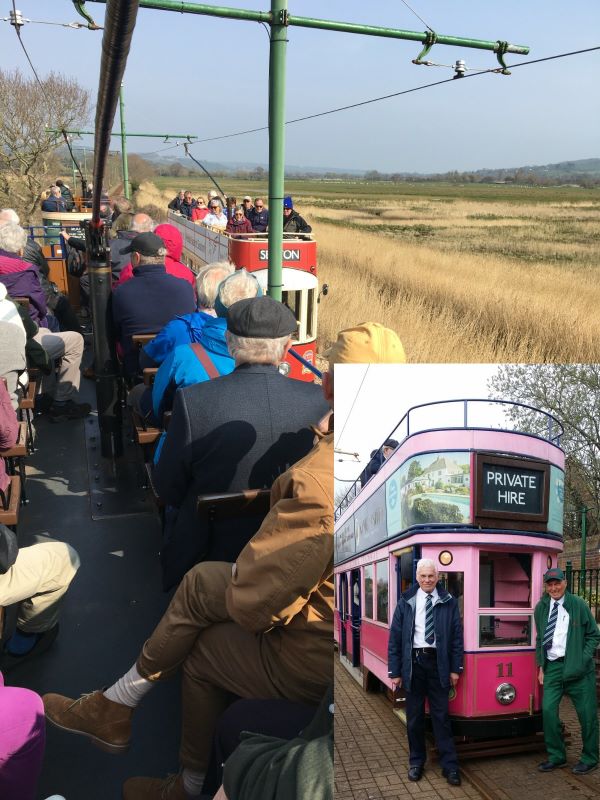