The Wolves of Yellowstone 2nd June 2021

All wolves were eradicated from Yellowstone Park, Montana USA in the 1930’s by poisoning carcases with Wolfbain (being a selective poison to wolves) and powdered glass. A factor overlooked was that the wolf was the natural predator of indigenous elk & deer and increasing numbers led to the need of culling.  In the 1990’s it was decided to reintroduce wolves to control the elk & deer population. As Yellowstone covers an area about 1.5 times the size of U.K. this natural method was preferred.  This was undertaken by both soft release and hard release. For a soft release, containing pens are constructed and wolves are introduced for 10 weeks to get used to a particular area. A hard release is to ‘free’ wolves rom open crates in the middle of the park. The wolves were imported from Canada, Alberta and North Columbia by trapping and darting. The wolf is a pack animal so groups of wolves were put together from different pack to provide a broad gene pool and from both the grey and black wolves.

This was not without protest from anti wolf groups. In January 1995 during Bill Clinton’s presidency, the ‘Anti’s’ brought a prohibition law suit, the wolves had to stay in their crates and if the case was lost, to be put down. Fortunately the case was lost and the Rose Creek Pack was soft released. 10% had GPS collars with CCTV cameras. Road kill provided the food source with minimal human intervention. After 10 weeks they were released. It was necessary for wolves to be protected species within the park. Sadly some wolves territory roamed outside the park and were killed by ‘anti’ hunters.

Members of Teignmouth Probus Club were regaled with tales of several known wolf packs and their struggle for survival including a mange outbreak. Mange can occur when an animal suffers exposure and starvation leading to loss of fur which protects the wolf from extreme weather leading to death. There are now about 580 wolves over an area of 22 million acres. Bison have become a numbers problem and are now prey to the wolf packs being too big for the coyotes to tackle.

Club member Malcolm Adams thanked the speaker, Kirsty Peake from Widecombe for her Zoom presentation. Kirsty had spent part of her life in Yellowstone Park, being particularly interested in the volcano and wolf repopulation.

The next meeting on 16th June, is by Roger Hamilton talking about “The Amazing Bugatti Family”

The photo shows a wolf at Yellowstone and the presenter Kirsty Peake. 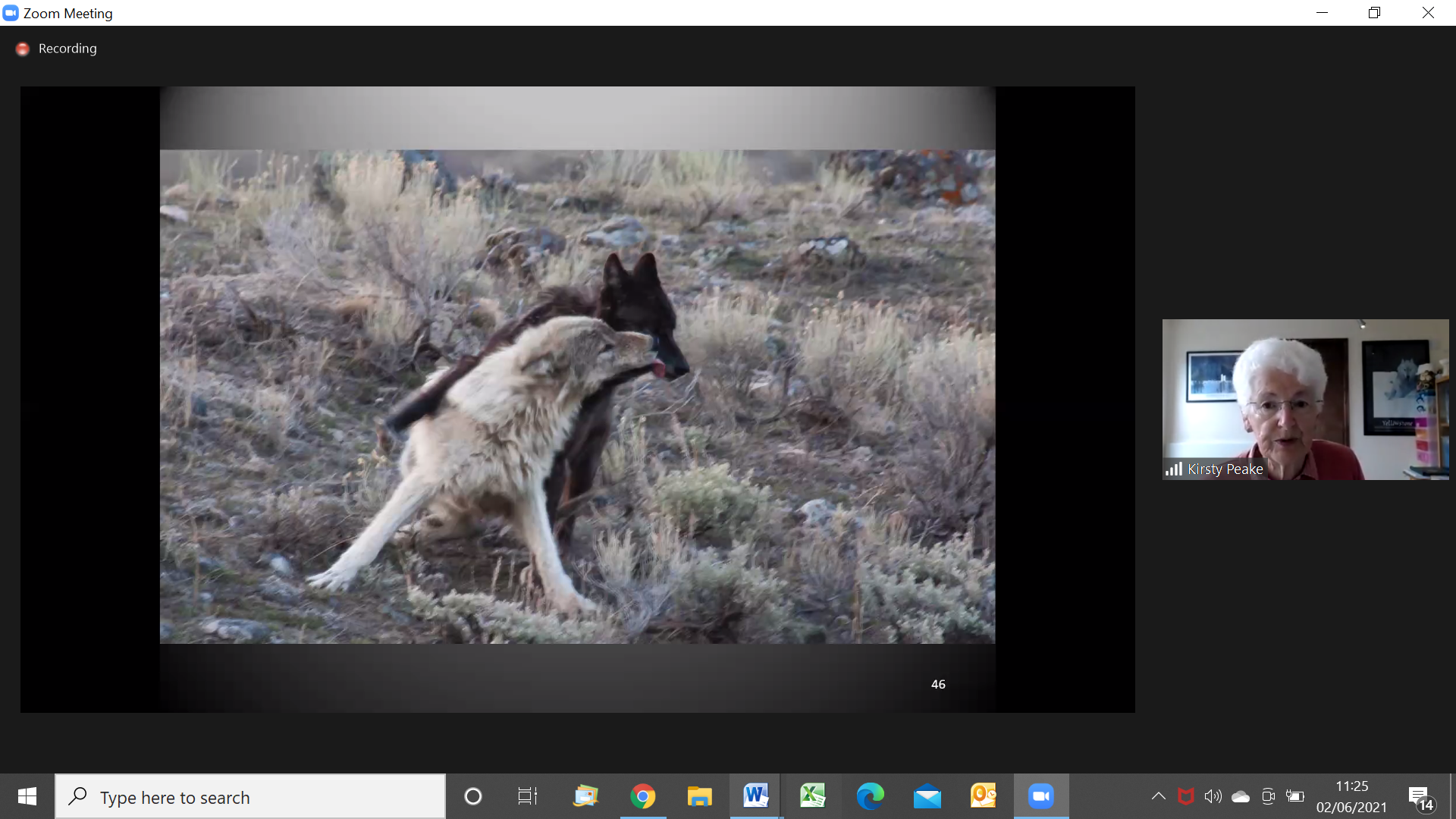