What happens to the kids when Dad is in clink ?

Teignmouth Men’s Probus club members were moved by the remarkable efforts of a local charity called Storybook Dads. This charity was not one anyone present at the Zoom meeting knew about. The founder, Sharon Berry OBE, was working in HMP Channings Wood and realised that prisoners were losing touch with their family. The children of prisoners get a bad deal and no fault of their own.

The idea developed to help an inmate to tell a bedtime story and a message by recording it on a CD to send home. Whilst the recording was taken in the prison, the editing and production was done at home by Sharon. The result was so successful that the project snowballed. Sharon moved to Dartmoor Prison where a spare cell was provided to set up a studio and prisoners were assigned to help out. There are some 200,000 children involved with an imprisoned parent. Children are 3 times more prone to mental health problems who have absentee parents. More than half of the prisoners lost contact with their family. Those who kept in contact with their families were 6 times less likely to re-offend. Whilst 2% of the population has been ‘in care’, 25% of prisoners have been ‘in care’ as a child themselves. Nearly half of males were excluded from school and more than half had no qualification. In 2003 the charity Storybook Dads, was set up to raise the funds needed so the project could progress. The charity provided the supported for more staff and the prison service appreciated the value to the general wellbeing of prisoners, particularly their families.

In 2015, rooms became available back at Channings Wood Prison as an in-house call centre closed and Storybook Dads returned there with more staff, but the deal included up to a score of prisoners working for them. Members of the Armed Services also suffer similar deprivation of normal family life, and the concept has also been exported to them too. There is also Storybook for Mums, although there are fewer female prisoners with Bristol being the nearest for the South-West.

The support given to families led to families sending back videos for inmates. This involved very close rules and 5 minutes at the most. From interviews and recordings with prisoners, the average reading age was about 11 years. Besides the family benefit, the work helped participating inmates to improve their reading and using skills learned to became outworkers at home upon release becoming responsible parents and assisting rehabilitation.

The present charitable trust employs a staff of 9, some part time, 16 prisoners and 20 or so ex-prisoner home workers providing editing and production service to some 100 prisons.  Whilst some support has been given by the National Lottery, Sharon now spends most of her time fund finding to keep this £180,000 annual enterprise going. For more information and ways to support go to www.storybookdads.org.uk.

Newspapers for the Blind.

The vote of thanks was given by committee member Steve Barttersby. The next meeting will be on 2nd June and the subject will be "The Wolves of Yellowstone" presented by Kirsty Peake. 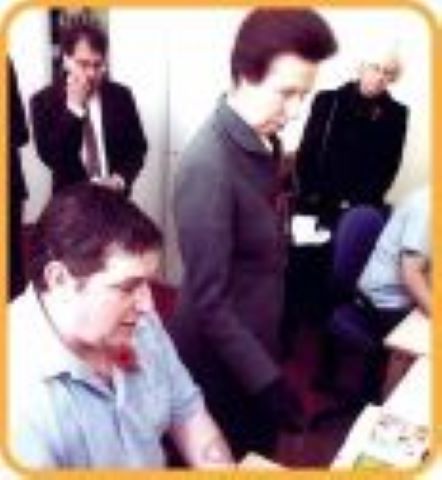