Life on the Edge of the Roman Empire

At the Teignmouth Probus Club April meeting, speaker Derek Gore presented a slide show of the amazing discovery of an extensive ancient 43 acre settlement at Ipplepen with a Roman main road connection to Exeter.

The ‘dig’ took place over successive summers from 2012 to 2019. The common activity was slate mining with a quarry nearby. Roof slates from buildings of the era found in Exeter are traced back to this quarry. There was archaeological evidence of human activity both the pre (late Iron Age pottery fragments) and post Roman period (Medieval Period) but most of the extensive remains discovered are from the Roman occupation including a wine amphora dating AD43-70. Over 150 roman coins have been unearthed scattered over this huge area dating from 100BC over a 500 year period in fact far more than found in Exeter. The evidence points to individual coins having been lost over a long period of occupation, dropping out of clothing rather than a large hoard being scattered by farming activity. The collection is currently in the hands of the British Museum and their report is still awaited. Other evidence includes post holes of many farmstead round houses some 40ft diameter belonging to ‘high status’ people of wealth with Samian pottery shards, a 12 foot wide roman road which had been resurfaced several times and pot hole repairs so a very well used highway. Finds of industrial metal working waste. There were graves beside the roadway which radio carbon dating places in the 4th to 8th century. Evidence of water wells used as rubbish dumps, a 4 post granary, temples or shrines of a religious character and most recently a slaughter house with cattle skulls carefully placed in a long ditch. Photograph shows detailed excavations taking place.

Look out for the full story soon to be available in print including the British Museums findings about the roman coins. Further information https://ipplepen.exeter.ac.uk/ 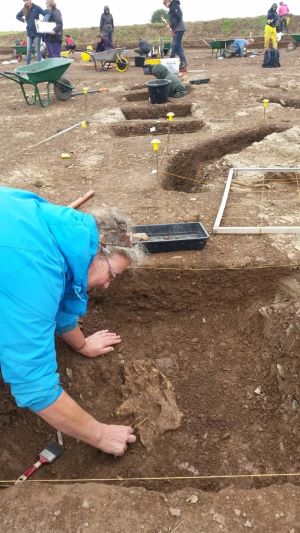