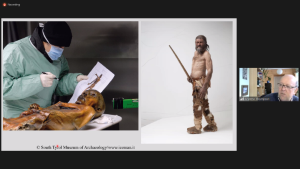 January’s virtual Zoom meeting saw retired engineer Brian Laidler take over the chairmanship from Keith Underhill. Brian’s first meeting this month was a Powerpoint slide show by Andre Thompson about the accidental discovery of a corpse frozen in the ice in the Tyrolean Austrian/Italian Alps. After a territorial dispute it was established that whilst he was found in Austria, he was killed on what used to be Italian territory before more recent boundary changes. The Iceman known as Otzi was initially thought to be a more recent lost mountaineer, but a local anthropologist thought he was at least 4000 yrs old which started world-wide interest. He was exceptionally well preserved as he had been mummified by freeze drying then, deep freezing surfacing only in the late summer thaw of 1991.

Otzi was a male, aged in his late 40’s, born in the region and died in late spring early summer (fresh Maple leaves in carrier) of between 5300 to 5100 years ago (carbon dated). This was of the Neolithic Copper Age, older than the Pyramids or Stonehenge. He suffered from arterial sclerosis, arthritis, whip worm, had tooth ache and evidence of earlier injuries of a broken rib.

His last 3 days were traced from the contents of his gut. At -30 hours, he had been in a forest at lower altitude in Italy (pollen), descended to the valley below (Moss & sphagnum), He ate a full unhurried regular full meal of meat and various vegetables and had been in a tussle as at -12 hrs as he suffered a bad cut to his hand as if defending himself. 4 different blood types were found on his clothing. In his last hours, he ascended the mountain pass some 3000 ft nearing the top when his assailant(s) shot him in the back with bow and arrow from some distance below. The arrow shaft had been removed leaving the flint arrowhead lodged in his chest, It had severed an artery with vast internal bleeding sufficient to be fatal but an injury to the back of his head, was probably the final fatal blow.

He was thrown into a gully and his personal possessions were carefully place nearby indicating respect as otherwise by the rites at the time, a person’s body would be defiled and his possessions broken to deny entry to the afterlife. There was no evidence of theft as valuables were not taken.

He was an important man of substance from his dress and personal artefacts, copper headed axe, smoke tanned leather clothing of goat and brown bear, substantial grass cloak, leggings and good shoes. He carried a flint knife, an unfinished yew bow stave a bark quiver with arrows and a 2 metre gut bowstring and a long leather belt with pouch containing a bone needle, flint drill, scraper, a fire lighting kit and a first aid kit (herbs and fungi to treat whip worm). He had a wooden framed back pack containing, netting for trapping, birch bark containers including a store for embers ready to quick start a fire amongst other things.

Committee member Steve Battersby’s vote of thanks was interrupted by band width  problems and was completed by Chairman Brian Laidler. More information can be found on www.iceman.it/otzi

The next meeting on 17th February is by Ian Handford talking about Oliver Heaviside, Scientist & Mathematician. .

If any retired male readers in Teignmouth would like to join us, please request via our website :  http://www.teignmouth-probus-club.org.uk