Hunt for the Bismark Presented by Eric Walcom

Eric Wolcom, a fellow member of Babbacombe Probus Club returned to Teignmouth to entertain 26 members and 5 visitors from Devon, Somerset and Dorset for a Zoom presentation of the 1941 hunt and sinking of the pride of the German battle fleet - the battleship Bismarck. Her keel was laid in Hamburg in 1936, launched on 14/02/1939 and completed on 24/08/1940. The Bismarck was the sister ship to The Tirpitz.

In May 1941 the Bismarck was spotted with Heavy Cruiser Prinz Eugen breaking out from Germany bound for the Atlantic by the Swedish and reported to the British. Admiral Tovey formed a battle group of HMS King George V, Victorious (a new battleship, Cruisers Galatea, Kenya, Aurora, Hermoine  and 7 Destroyers with HMS Repulse joining later. Another the ‘hood’ group, HMS Hood, Prince of Wales and 6 fleet destroyers were dispatched to the Denmark Straights.  Force H was ordered out of the Mediterranean Aircraft Carrier HMS Ark Royal, Renoun, Sheffield plus a fleet of Destroyers,

The weather was poor and the fleet had a lot of water to search and Bismarck continued to avoid detection. The Hood group engaged in the Battle of the Denmark Straights where the ‘pride of the navy’ HMS Hood was sunk, but a shell hit on Bismarck caused loss of fuel and reduced speeds. The Bismarck made it to the Atlantic some 1800 miles from Hamburg  and was finally spotted 690 miles out from Brest. Ark Royal launched 14 Swordfish Torpedo bombers but intercepted HMS Sheffield in error. Later Ark Royal dispatched 15 Torpedo bombers which together with several fleet warships, the Rodney’s 16” shell hit the Bismarck’s superstructure killing Admiral Lujens, Captain Lindemann and several 100 sailors and a torpedo struck one of the steering rudders and was disabled. Bismarck suffered many shell and armour piercing shells and HMS Dorsetshire finishes her off and sinks her with 2 torpedoes on her starboard and one on the post side. Only 111 crew were saved.

During this time the Prinz Eugen suffered engine failure and put into Brest never to leave for the remaider of the war.

From the resources assigned, it was clear the Bismarck  was never going to be permitted to enter active service and wreak havoc on the high seas. If not sunk could we have lost the war?

Vote of thanks was given by Malcolm Adams. 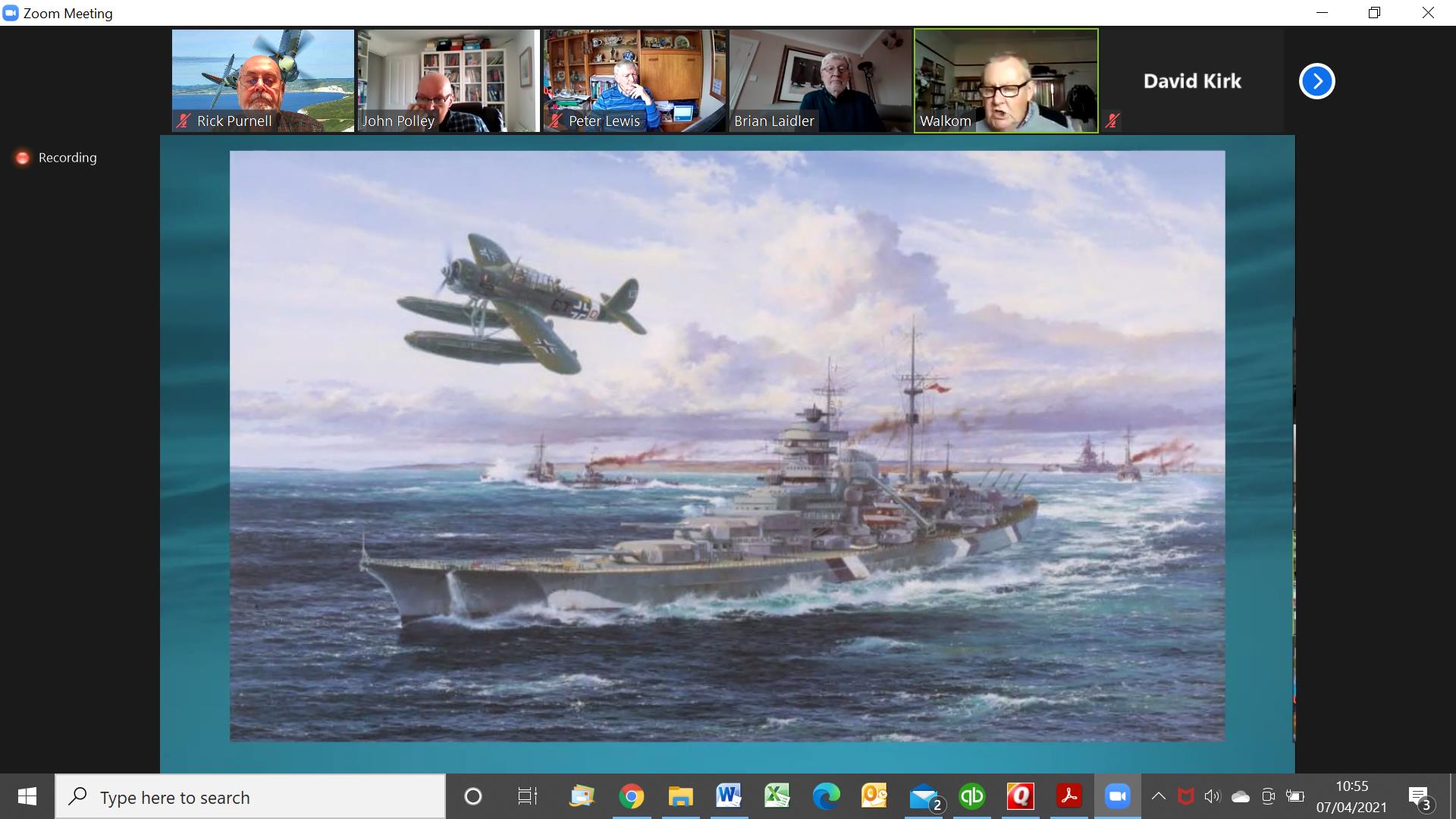